Emma Beag gave Danny his second memorable day since taking over the licence when she delivered him his first winner over jumps in determined fashion at Carlisle yesterday.

Running in the Northern Lights Stayers Hurdle Series Qualifier over 3m1f, she faced 11 rivals on her first outing since tipping up at Wetherby when tiring in heavy ground just after Christmas.

Thankfully that fall appeared to have left no lingering effects on this tough little mare and she allowed Henry to settle her at the rear of the field, conserving vital energy & jumping efficiently on the soft ground.

Although they took up a change of position in midfield for the final circuit Henry was still content to bide his time until four out when he sent Emma on to chase down the then 15 length clear leader (& favourite) along with the eventual second placed horse, and this pair were disputing 2nd place three out.

As they continued to close and the favourite began to weaken Emma led, travelling easily, before approaching the second last but was then headed after two out.

However this super gutsy mare refused to be beaten and she rallied once more, regaining the lead after jumping the last and staying on well to go clear in the final 110 yards and win by 3 1/2 lengths. 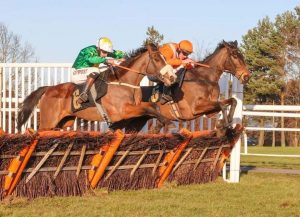 The only downside to the day was the fact joint owners Mary & Peter Sadler and Maurice Friel weren’t allowed to be there to watch their horse but doubtless it will still be a day for everyone to file in the happy memory bank! 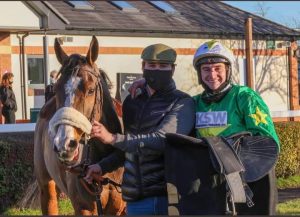