Beaten but not Bowed…..

Fiddlers Bow made his seasonal reappearance at Doncaster last Friday, almost a year after his last (winning) run at Ayr.

Considering the extremely wet autumn / winter to date, the unseasonably dry spring which had prevented him from running since January seemed but a distant memory….!

Roderick Duncan & his team at Doncaster had done a sterling job with their track given that the recent incessant rainfall had forced the abandonment of its recent fixtures.

Facing five rivals in the 0-120, 2m3f handicap chase, Fiddlers Bow cleared the first fence with an almighty leap and thereafter Henry had him nicely positioned against the inner rail holding a share of second place.

Occasionally switching to the outer and in no worse than third, Fiddlers jumped with aplomb in the distinctive green & red colours of co-owner Mervyn Buckley.

At the 3rd last Henry sent Fiddlers to challenge the leader and he was ahead as he cleared the final fence.

With a two length lead as they passed the 1/2 furlong pole, seemingly all Fiddlers had to do was keep galloping to the line but inside the final 100 yards he was headed and had to settle for 2nd place.

Henry, & assistant trainer Danny Brooke (who, as Fiddlers daily work rider, is largely to be credited for his training) were particularly devastated in the immediate aftermath but once the initial disappointment of a “race lost” was replaced by some logical thinking, it was clear that an 11 month absence and having to give the winner 10lbs had made a significant difference when it ultimately mattered. However the way the horse had jumped and travelled gave everyone plenty of cause for optimism for the coming months.

Co-owner Mervyn Buckley and wife Jen were there to support Fiddlers Bow along with members of the Brough Farm Racing Partnership – Phil Bulley, Chris Royston & Sue Kramer. Guy & Lyn Cattell had to settle for watching the race on their phones whilst on a train to Edinburgh and by all accounts it was fortunate they weren’t in the “quiet carriage” given their long distance vocal support!

We are extremely appreciative to have such great owners involved in this lovely horse – the ensuing email exchange between them all in the days after the race was indicative of their collective enthusiasm for both his success & well-being.

Unfortunately in little Emma Beag’s case, her lack of a long face, or the favourite’s longer one, cost her the race in yesterday’s 0-100 handicap hurdle over 3 miles at Market Rasen when she was beaten a nose in the tightest of photo finishes.

As in True Romance’s case at Musselburgh last month, we would much prefer the “official photo” to be one of the winning horse & connections as opposed to the one that goes to the Judge…..but nonetheless Emma lost nothing in defeat having run a great race, under a lovely ride from John Kington, after almost five months off the track.

Johnny had the eight year old held up on the outer for much of the race, taking closer order after the 7th hurdle. Having led over the 2nd last Emma was joined at the last by the eventual winner and when headed briefly on the run in she rallied gamely to regain the lead inside the last 100 yards, only to be denied on the line by a longer nose…..

Part-owner Mary Sadler, and husband Peter, were there to support their horse and hopefully it won’t be long before they have the official photo that we all want! 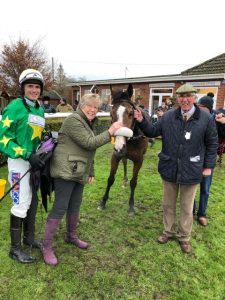 Of our other two runners, Forewarning remains a work in progress as he completed only his second run over hurdles. Kildaven Spider was disappointing, running no sort of race in the 2m3f, handicap chase before Henry pulled her up three out – perhaps something will come to light with her in the coming days.

Spider’s connections were also in attendance but a disappointing day for them was mitigated by a surprise invitation issued to our Owners that morning to join the Chairman of the Racecourse for lunch in the Boardroom where they were all thoroughly well fed & watered. It was a lovely gesture on behalf of the track & one that was very much appreciated by everyone.