As defined by the Collins Dictionary, Melgate Majeure certainly proved to be  an “irresistible and – having been sent off at 20/1 some might also say – unexpected force” on the all-weather at Newcastle yesterday when he won Division 1 of the 0-60 handicap over 1m2f; in the process giving Danny his first winner as a trainer since recently taking over the licence from mum Julia.

It was also the horse’s first win from three attempts for owner Mervyn Buckley and, as Mervyn has been a long time supporter & friend of the yard, everyone was especially delighted that his distinctive colours were the ones to mark this memorable occasion.

Initially keen out of the gates, as indeed he had been on his previous two starts, jockey Jimmy Sullivan soon had Melgate nicely settled towards the rear before making a tactically astute manoeuvre when switching to the stands rail over 2f out. He took the lead with a furlong to go and was ridden when hard pressed by the runner up but kept on well inside the final 110 yards to score comfortably by a length and a half.

Having been bought with a view to going jumping (Mervyn also co-owns chaser Fiddlers Bow) Danny had made the decision to step Melgate up in trip from his previous two runs over a mile, and it paid dividends.

Whilst he might well continue to ply his trade on the flat whilst the weather conditions remain challenging, everyone is very excited to see what this lovely 5 year old by Lethal Force produces over hurdles when the better ground returns. 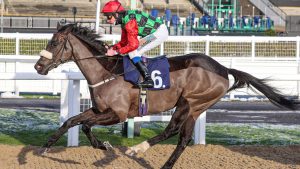