Many of you will know the gratitude we have for the Air Ambulance when they saved Henry’s life following a serious fall at Hexham in October 2016.

He fell from Old Storm at the second fence of a two-and-a-half-mile handicap chase and racing was delayed by almost two hours as the course medical team worked with North East Ambulance Service crew members, and medics from the Great North Air Ambulance, to treat him at the scene.

“I have no doubt whatsoever that the combined actions of the medical personnel on duty that day saved my life, and for that I (and my family) will be eternally grateful. As a jockey, I love what I do and I take it for granted that I will return home at the end of a day’s work, as do my colleagues.

“It takes something like this to fully appreciate the support that allows us to be as safe as possible whilst doing our job.”

Ant now he gets to make videos like this!!

Merry Christmas One & All x

Update…..This video was also used as a fund raiser for Luke Bell, a young boy who was battling cancer. As a very sad post script to this story, we have just found out Luke lost that battle today and has passed away…..On behalf of all the lads in the weighing room they will continue to raise money in his memory, and try to raise awareness for his cause.

Please spare a thought for all the terminally ill children this Christmas. 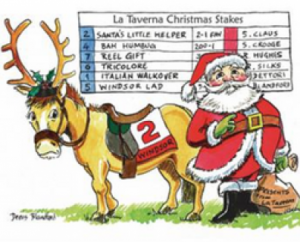 We’d like to take the opportunity to wish all our owners, staff, and everyone who has supported us throughout 2018, a very happy Christmas.

And to the horses who have run for us; some have won, some have been placed and some have simply tried their best….they are why we do it.

Without all of the above, human & equine, we wouldn’t be what we are – so a huge thank you.

Enjoy the racing over the festive period and here’s wishing you all a very prosperous 2019.

Our two runners this week both returned to the respective scene of their last run/victory and whilst neither managed to win, both ran an absolute cracker of a race in defeat.

Piazon went to Southwell on Thursday to contest the 0-65 handicap. Once again ridden by Nathan Evans, he was having a rare step up to 6f on this occasion.

Despite a wide draw, Piazon was prominent throughout the race and appeared to hold every chance approaching the final furlong. Although the eventual winner then just quickened away, he stayed on really well beaten just a neck into 3rd place.

Getting him to the races and down to the start was a victory in itself as he was fairly revved when he left the yard earlier in the day, having taken great exception to an early morning bath in preparation for his away day!

Then today Copt Hill was back in action at Newcastle, scene of arguably his greatest victory just 9 days ago (!) to take in another 0-100 handicap hurdle over the same trip of 2m 1/2f. Despite being raised 8lbs by the handicapper for his win, this was undoubtedly a more competitive race.

Displaying his usual exuberance at the start, Copt Hill nevertheless jumped off smartly and was sent into the lead by his winning accomplice Ross Chapman.

Despite not jumping the first flight particularly fluently, thereafter he took the field of 12 along from the front until two out where he was headed by the eventual 3rd placed horse. As before, he showed hitherto unseen resolution and rallied to hold every chance jumping the last, running on strongly but unfortunately just beaten into second place on the run-in.

Once again it was a proud moment for all connections of this quirky little horse who, at almost 11 years old, seems to have found his racing mojo!

Copt Hill is a WINNER!!

Sometimes it’s possible to overthink a title, to try to be too clever or witty.

So having spent sleepless hours going through variations of …..

“Copty shows his rivals a Christmas Tail” (tale as in story, tail as in horse – hhmm?)

……just sometimes it’s best to keep it simple and let the title speak for itself.

Yes he really went and did it – COPT HILL WON AT NEWCASTLE YESTERDAY!!

A couple of weeks short of his 11th birthday, on his 50th start over hurdles, and a month shy of 6 years since his first (and only) win, Copt Hill celebrated his half century with a length & a half victory over his 8 rivals from out of the handicap in the Class 5, 0-100,  2m 1/2f Handicap Hurdle….and we couldn’t be more proud of him.

His jumping had rather failed him in recent outings so to say he’d been working hard on his technique would be an understatement. And having proved that you can in fact teach an old dog new tricks, he didn’t miss a beat this time at all the obstacles under a lovely ride from Ross Chapman.

Up to his usual tricks at the start, fly bucking and leaping, the Starter fortunately took a pragmatic view of Copt Hill’s unrestrained enthusiasm and let them go. Always prominent, despite having been dropped back in trip, Ross asked him to press the leader to go in front briefly before three out. He was then headed before the next and ridden along when two lengths down.

Having realised that the two flicks of encouragement he gave Copt Hill with the whip between the last two flights weren’t well received, Ross was smart enough to resort to hands & heels, and how the horse responded for him! A fantastic leap at the last followed by a previously undiscovered burst of acceleration saw him rally strongly and regain the lead in the last 50 yards.

Suffice to say Kev Traylor (our Travelling Head Lad & he of unshakeable faith in the horse) was in delirious pieces post-race so it was fortunate that Copt Hill barely had a blow on him and the most they had to do was smile happily for the photos.

It was a shame that Copt Hill’s two main owners, John & Billy Platts, were unable to attend but co-owner Eddie Lamb was there to cheer him on and summed his feelings up perfectly afterwards when he said “I now know where Cloud 9 is because I’m on it!”

The signage proves it has really happened!

Whilst nothing we can claim credit for, we felt this one deserved a story nonetheless…..!

Enry Iggins, owned by The Golden Oldies Partnership, was having his first ever run and contested the last race of six on the card, the Ward Hadaway Open Maiden Race. Following 38mm of rain in the previous seven days the going was soft, making the three & a quarter mile course a true test of stamina.

Enry Iggins was one of only three 4 year olds in the race amongst a field of 14 but rarely belied his lack of experience under a beautiful ride from Joe Wright.

The superior race fitness of the winner, who had run twice in Ireland in October, ultimately made the difference as he ran on to beat Enry Iggins into second place by just three lengths. In a further boost to Enry Iggins’ performance, the winner’s most recent Irish Point form (3rd) was franked at the recent Tattersalls Ireland Cheltenham Sales last month when the runner up from that race sold for six figures.

Danny, and the connections, were therefore understandably delighted with the four year old Schiaparelli gelding and he now looks to have a really bright future under Rules.