Rory Makes His A Double

Ruaraidh Hugh braved the searing temperatures yesterday and returned to Worcester to tackle a field of 15 in the 2m4f, 0-100 handicap hurdle under a penalty for his win there just 9 days ago.

The course had thoughtfully warned in advance of the expected weather conditions and assistant trainer Danny was relieved on arrival, after a gruelling journey in heavy traffic and the temperature gauge in the horsebox showing 30+ degrees, to find they had been allocated a stable with plenty of shade. Kev then did a sterling job hosing Rory off at regular intervals to ensure he remained cool ahead of his race.

With our ex-Conditional jockey Ross Turner in the saddle, Ruaraidh Hugh was sent off second favourite this time and settled for much of the race in a share of 3rd/4th place.

However turning in he hit the front and, with his ears pricked and a big bold jump at the third last, he soon quickened away from the rest of the field.

Rory then kept on strongly, jumping the last with a 15 length advantage, and although he was perfectly entitled to idle a little on the run-in, his ears were still pricked as he passed the line for a comfortable six length win.

The whole team couldn’t be more proud of this little horse and absolutely delighted for his owners, the Harbour Rose Partnership.

Ruaraidh Hugh wore much the same expression on the way home too!

Well what a day at Cartmel……and how proud are we of these two superstar horses?!

Under jockey Sean Quinlan, the 6 year old led the field of thirteen from flag fall setting a fairly searing pace which ensured a truly run race from the outset. Hurdling fluently, including a particularly prodigious leap at the 3rd last, Short Flight was briefly headed on the long run in. But Sean, cool under pressure & knowing exactly how much horse he had under him, just rode Shorty out and, whilst the official result required a photo, the reality was a “comfortable” short head.

Co-owner Kiel Ward has been immensely patient with this gorgeous horse since acquiring him from the Sales following his point to point 3rd in Ireland (amongst some very talented classmates) and today was a huge repayment of that faith in a horse who hasn’t been rushed to perform.

Ridden by our own John Kington, this was Staggy’s first run since a recent wind operation.  The 11 year old had missed the whole of 2017 so whilst having nothing to prove on one hand, he in fact had everything to prove…..and didn’t he just!

JK always had Staggy prominent and in the closing stages they looked comfortable for 3rd at least, but then ran on strongly after the last in the final furlong to win by a decisive four lengths!

Owned by Julia’s father John and Uncle Billy (Platts), and ridden every day by Julia herself, Staggy’s was an emotional win to say the least but in the context of giving the yard and trainer a first ever double, it really couldn’t have been sweeter. 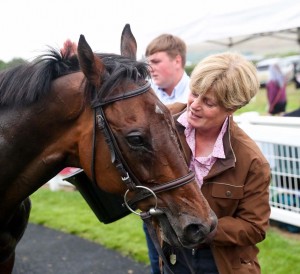 Celebrating with sauce of the bubbly kind at Worcester

The champagne corks were popping last night at Worcester (metaphorically at least!) when Ruaraidh Hugh gave the yard its first win of the season (and his first for two years) and jockey John Kington rode out his claim as a result.

Acquired by the Harbour Rose Partnership in January, this was by far Rory’s best performance to date and happily the owners were present to witness, and enjoy, this smart little horse’s success.

In a field of 15, JK always had Rory handily placed and alternated between leading and just dropping him in behind throughout the 2m4f trip.

He led again from three out and simply continued to draw away for an easy win of five lengths from the runner up, with the rest of the field some 20+ lengths behind him!

Johnny gave the horse a brilliant ride and we were doubly delighted that he rode out his claim on one of our horses.

A Pair Of Threes

Last Sunday saw us not joining the majority of the country in either watching the World Cup Final, the Men’s Singles at Wimbledon, or sunbathing on what was another scorching hot day, but instead going racing. To be fair one of the team started the afternoon sunbathing but more on that later……

Dear Dora delighted on her debut at (unfortunately for continuity of that sentence it wasn’t Doncaster…..) Southwell.

But first up Copt Hill earned his carrots from Kev (work rider & self-appointed Chairman of the Copt Hill Fan Club – membership of two to date but rapidly growing!)

With Sean Quinlan deputising for Henry, who had been stood down after a fall earlier in the day, Copty was having his first run since a recent wind operation in the 3m, 0-100 handicap hurdle. He behaved impeccably until sighting the jockeys entering the paddock at which point the excitement kicked in and he used his best endeavours to tie Kev in a knot with high speed spins and leaps both before & after Sean had been legged up!

However once racing he was a model pro; travelling handily and jumping well despite being hampered badly at the 9th. Sean sent the 10 year old on from three out and he looked to be cruising when others behind were starting to get to work. Unfortunately though, as he’s done in the past, he flattened out between the last two hurdles allowing two to come past, but then ran on again and was closing strongly when beaten 3 & 3/4 lengths in third place at the line.

That was by far his best performance for us and hopefully now he knows he can breathe when under pressure, he will have the confidence to keep going next time.

Dear Dora was next up in the 2m, Mares Standard Open National Hunt Flat Race. The four year old was partnered on her racecourse debut by John Kington who answered the call when Henry was injured and, forsaking the just applied sun tan lotion, had driven straight down to Southwell from Middleham to take the ride.

He had Dora nicely settled and held up at the rear, gradually putting her into the race as the field progressed down the back straight. The pair were in a breakaway group of three as the pace lifted in the home straight. Dora’s inexperience just started to show against the other two who had both run before and despite looking a bit unbalanced in the closing stages, she passed the line in third only beaten 3 lengths with the rest of the field fairly strung out behind.

Everyone was delighted with the performance especially as Dora had never galloped on grass before, the prolonged hot spell restricting her home work to the all-weather gallops. Being by Dark Angel, a sire more noted for producing sprinters, she has been trained for stamina at this early stage of her career and not yet been taught to quicken – definitely one to watch for future!

On the first day of the 2018 Great Yorkshire Show, Danny could be found leading up stock of a very different kind.

Jointly owned by Danny & Henry, Jadore is a British Blue (currently in calf) and was being shown in the “cow in calf or with calf at foot” class.

She was awarded Reserve Champion of the Breed much to everyone’s delight.