Grey Atlantic Way gained a well deserved success yesterday at Sedgefield over a trip further than he’d ever tackled before when winning the 0-100 handicap chase over 3m3f by a decisive 11 lengths.

With Henry in the saddle, making it a trainer/jockey family affair, the grey was settled in the rear section of midfield of the 9 runners for much of the race with his only slight jumping error coming at the 8th of the 21 fences.

Indicative of the pace steadying, the field closed up at the top of the hill on the far side and rounding the bend to begin the descent into the home straight – for the stamina testing 3rd & final time!

Grey Atlantic Way found himself in a bit of a traffic jam & momentarily short of room after jumping the 2nd last but was ridden to lead and went readily clear. With just the last to jump to secure victory he was foot perfect and being eased when passing the post for his first win – not only for the yard & his connections but also, somewhat extraordinarily, himself!

This lovely 8 year old only joined the yard a few months ago and a soft palate procedure has undoubtedly helped him both physically & mentally produce what we always felt he was capable of.

Maurice Friel, in whose colours Grey Atlantic Way runs, was unable to attend but fellow joint-owner Mary Sadler, and husband Peter, were there to cheer their horse on and we couldn’t be more delighted for the partnership following the recent retirement to the breeding paddocks of their previous equine interest, Emma Beag.

And whilst Grey Atlantic Way provided Danny with his first winner over fences as a trainer, coincidentally it was Emma Beag who was his first hurdles winner…. a happy statistic to end on! 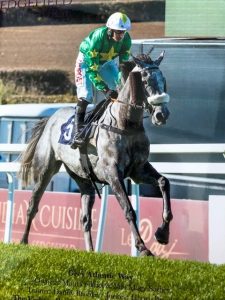 Danny’s clearly been paying attention during the home-schooling media training!!

And Mary’s a natural in front of the camera…..