What a Super Sunday yesterday turned out to be for Mervyn Buckley & the Brough Farm Racing Partnership, and everyone at the yard, when Fiddlers Bow and our own Emma Beag both won at Ayr!

Fiddlers was making the return journey to Scotland following on from his win at the course 12 days ago. Ridden on this occasion by Henry (Brooke) he faced nine rivals and a step up in trip to 2m5½f in the 0-120 handicap chase.

Henry had Fiddlers tracking the leaders from the outset and sent him on to lead from five out. With the exception of one small error in an otherwise exemplary round of jumping, the pair stayed on strongly from the last to win by a comfortable 4½ lengths. 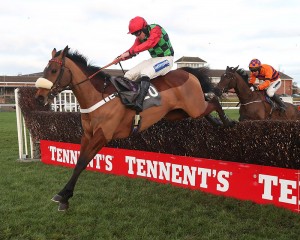 In the following race Emma Beag faced 15 rivals in the 3m½f, 0-100 handicap hurdle. After a break of 300 days, this game little mare took an enthusiastic hold under Henry from the outset and was held up in touch with the leaders on the outside of the field.

When the commentator made the observation on turning in to the home straight for the final time that most of the jockeys appeared to be “flexing their muscles…” (energetically pushing along) “…with the exception of Henry Brooke” (motionless), he perhaps underestimated how much strain Henry’s biceps were under!

Emma was then allowed to go on and lead from the 8th flight and she scampered clear after two out. Thereafter she kept on strongly and won unchallenged by five lengths.

She may be small in stature but her heart & will to win are enormous. As with many of our horses at the time, Emma just wasn’t quite right last year so it was lovely to see her produce what we always believed her to be capable of. 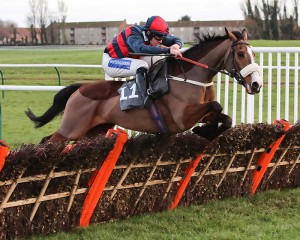 Along with Fiddlers performance, and with Henry giving both horses a great ride, it was a very proud day for the yard.