Fearless on a night out at Aintree & Hats Off To Larry is No.1

It always pays to be brave round Aintree and Fearless lived up his name in good style when giving Danny & everyone in the yard a welcome winner last Friday evening.

Facing just three opponents in the 0-125 handicap chase over 2 miles on the Mildmay Course, it was definitely a case of quality over quantity with very little in the market separating the four horses.

Henry was in the saddle having only recently returned from injury and he had Fearless held up behind the leaders with his only slight mistake, in an otherwise excellent display of jumping, coming five out. Travelling well they went 3rd before two out but were denied a clear run approaching the last. However Fearless got his gap at a critical moment & took it decisively to lead on the run in and thereafter ran on well to pass the post two lengths clear.

It should also be said that a serious night out in Liverpool is not for the faint hearted and the members of The Fearless Partnership demonstrated their undoubted bravery & stamina in good style when celebrating the win with all the enthusiasm it deserved! 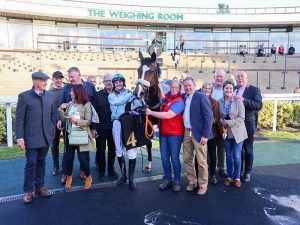 The following day Hats Off To Larry headed to Hexham for the 0-105 handicap hurdle over 2 miles in which he was making his debut for the yard, having been a smart youngster for Mick Channon back in the day.

Henry was once again on board but this time with the added pressure of riding for his future wife & in-laws…. and it always pays to try & stay in the good books!

The plan had originally been to run the horse on the last day of the recent Cartmel meeting but the ground went against him when it turned from good to soft, however Hexham provided his conditions and he lined up in a field of 10 runners.

Henry had Larry dropped out the back for much of the race, only asking him to move up before two out. They continued to make smooth headway when shaken up to press the leaders on the home turn and took the lead, going easily, approaching the last. Despite a not entirely fluent jump Larry was ridden out on the run-in to win comfortably by a length & three quarters.

It was a big family day with Danny training, Henry riding, Alice (Henry’s fiancee) owning & leading up, and John & Penny White (Alice’s parents) and Arthur (Henry & Alice’s son) cheering them home – in fact those back at the yard in Middleham thought they could just about hear John cheering all the way from Hexham!

Mention must also be given to Baltic Baron who ran at York last Friday over 1m2f  under Mr Toby Wynne, finishing fourth in a race not run at all to suit. With the field having gone no pace whatsoever Baron made headway 3f out to chase the leaders inside the final furlong, finishing just four lengths off the winner.

Act Of Will then made his racecourse debut yesterday at Carlisle in the Restricted Novice Stakes over 6f. He was handled brilliantly in the parade ring by Kev when getting quite over excited at being at his first ever “party” and despite going to the start via the chase course in his keenness to join in the fun with the 13 other two  year old party goers, he ran a fabulous race to be just held by the winner on the line – the official distance being a (fast diminishing) neck. He understandably ran a bit green at times at times and was bumped at the start, but he bravely went through a gap when asked by Jack Garritty and was strong in the finish – an all round experience that he will have learned a lot from & we were delighted with him.